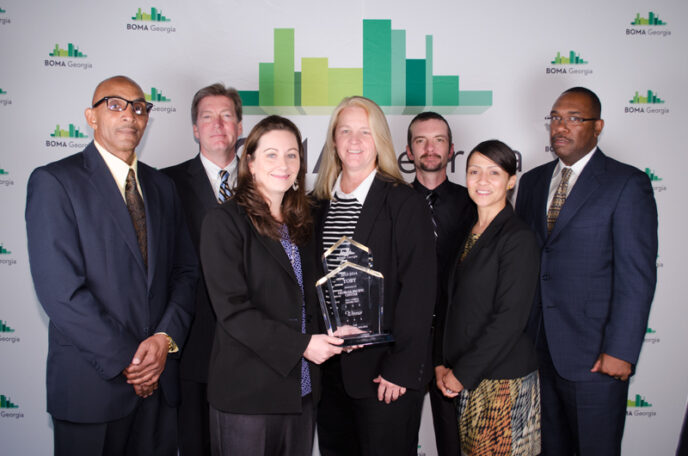 This LEED Silver Certified property is in pursuit of LEED Gold certification for 2015. With an ENERGY STAR score of 78, the building has achieved its ENERGY STAR label in 2010, 2011 and 2012, with its submission currently complete for 2013. The building is also BOMA 360 Certified and is a participant in the Atlanta Better Building Challenge. The building’s green and sustainability efforts are supported by four LEED accredited professionals serving on the management team.

Georgia-Pacific Center’s lobby lighting retrofit resulted in 50,810 watts saved, while the retrofit to the east-side illumination of the building resulted in a 75 percent reduction of energy consumption and a cost reduction from $55 per day to $14 per day.

The property also instituted an organic composting program for its café and coffee shop. That along with other conservation efforts resulted in an annual water usage reduction in 2013 of 27 from 2012 and an electrical consumption reduction in 2013 of 13 percent from 2012. Traffic reduction initiatives at Georgia-Pacific Center have realized a 44 percent reduction in conventional commutes through public transportation, low-emitting vehicles, carpools and teleworking. The building is currently host to 38 carpools, and a large number of participants utilize the Xpress, a regional public transportation service with the Cobb County and Gwinnett County Transits.