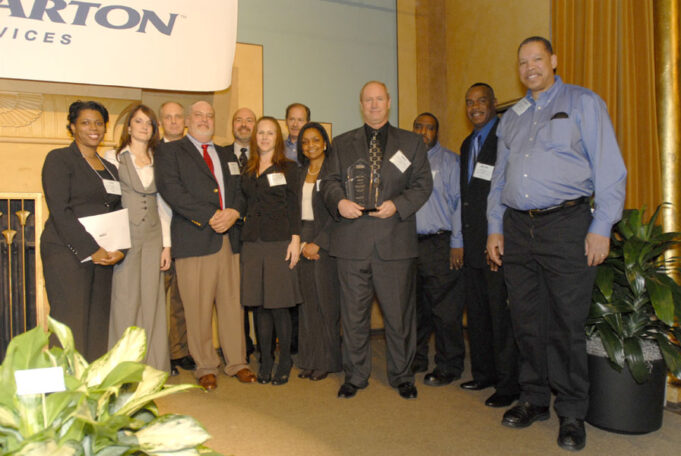 Situated on the eastern exposure of Centennial Olympic Park, the American Cancer Society Center has a simplistic exterior design that downplays its expansive columns and spacious floor plates. Covered walkways connect the building to Atlanta’s MARTA rail system. It is also connected to the Atlanta Apparel Mart and Merchandise Mart, and is near many retail amenities and restaurants, including the Peachtree Center Pedestrian Mall, Starbucks, Azio’s Restaurant, Ruth’s Chris Steakhouse, Ray’s in the City and the Hard Rock Café, just to name a few. It was 1989 when John Portman saw his vision of this nine-story building through to completion. With an additional four-story below-grade parking garage, this Class A commercial office building has 993,260 rentable square feet and encompasses over an entire city block.  Expansive atriums add to the building’s ambience as exterior balconies cascade over Atlanta’s premier park, Centennial Olympic Park, in the heart of the city’s business and tourism district. The American Cancer Society Center offers state-of-the-art meeting room facilities, including a 450-seat theatre equipped with video conferencing and streaming capability, an executive boardroom and a pressroom.  Rounding out the other tenant amenities are an on-site car wash, dry-cleaning pick up and delivery service to tenants’ doors, 24-hour security, high-speed Internet access, café seating in the atrium, a car repair service, and on-site catering. There is easy access to the center from interstates 75, 85 and 20. Centennial Olympic Park, the Georgia Aquarium, the World of Coke, the CNN Center, Phillips Arena, the Georgia Dome and the Georgia World Congress Center are only steps away. This superior location, combined with large floor plates of over 155,000 square feet with below-market operating expenses and competitive rental rates make this a very desirable corporate destination.