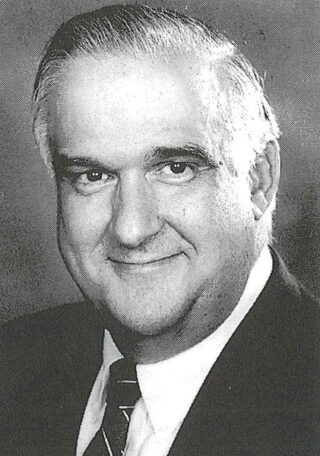 Stewart M. Huey, CAE arrived at the BOMA-Atlanta office on June 1, 1970 after the previous executive, Luther Call, had passed away months earlier. Huey’s tenure was marked with great advances for the association. At the time, the association office was located at the Healey Building. There was a loyal membership of approximately 40 companies, each represented by an individual. The association had a tradition of holding two luncheons per month, and these meetings were fun and well attended. Several landmark changes followed Huey’s entry into the position. Meetings became more technical and were designed to attract the professional managers that were being hired by corporations that were investing in real estate. These college-trained managers could not justify taking time off for strictly social events, but they would turn out well for educational programs on technical subjects. Membership began to grow. The debate about expanding the membership to include suburban members and increasing the number of vendor and service provider allied members was settled. BOMA-Atlanta also began to encourage additional representatives to attend the meetings. Women members became more active and were eager to get involved. Committee and board positions for females were followed by elected-officer positions. Increased involvement in the BOMA Southern Region and BOMA International organizations allowed for more veteran members and past presidents to represent the association at the higher levels. An emerging emphasis on BOMI designation programs followed, as did more involvement in city and State government affairs. A revised dues structure allowed much greater involvement of younger real estate professionals, and the training opportunities, as well as technical programs and the trade show, were natural outcomes of that growth.