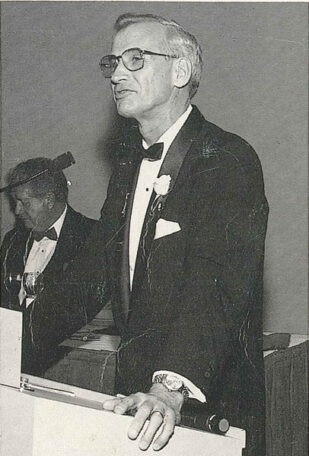 Roland Downing is one of the most recognizable names within BOMA-Atlanta/Georgia. Atlanta born-and-raised, Downing began a career in the banking industry in 1945 when he started working in the mail room at the First National Bank of Atlanta following his graduation from Georgia Military Academy. Downing attended the Atlanta division of the University of Georgia and graduated from the National Association of Bank Auditors, Accountants and Controllers School at the University of Wisconsin. He is also a graduate of the American Institute of Banking with a major in Commercial Banking. Downing worked hard to rise through the ranks at First National Bank of Atlanta, ending his career with the institution as its Vice President in charge of the property management division. As BOMA-Atlanta’s president, Downing is credited with strengthening the relationship between the local association and BOMA International, as well as vastly improving the financial position of BOMA International when he served as its president in 1989. Downing is a retired Army serviceman, retiring after 28 years of creditable service. Downing has also served on the Executive Board of Atlanta Area Council Boy Scouts of America; as the chairman of the united Way and American Red Cross campaigns; and as a city council member for the City of Riverdale. He has also been a member of the Clayton County Chamber of Commerce, Capital view Lodge No. 640 of the F&AM and the Yaarab Shrine Temple of Atlanta. He is a member of Riverdale Presbyterian Church and has been married to his wife Betty since 1947, with whom he has four sons, seven grandchildren and nine great grandchildren.