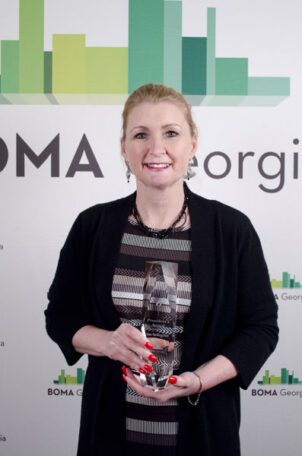 Mayberry Electric’s Lisa Hollingshed goes above and beyond in her dedication to BOMA. Not only is she involved locally, but often participates in association activities on both the Southern Region and International level. She played a key role in 2012’s Community Service Committee construction project as a member of the project’s core team. She helped leverage the manpower and unique expertise of Mayberry Electric to the benefit of the women and children served by the YWCA of Greater Atlanta.

Additionally, for many years, Hollingshed faithfully served on the Trade Show committee, one of BOMA Georgia’s biggest and greatly anticipated events, prior to her leading the committee in 2012. Hollingshed then spent time serving on BOMA Georgia’s board of directors. 2012 BOMA Georgia president, Judi Sponsel, underscored Hollingshed’s consistent contributions to the association by awarding her with the President’s Award.