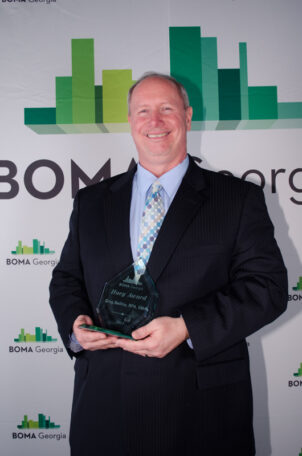 Greg Bellina, with Cousins Properties, was recognized as the 2013 Huey Award recipient, BOMA Georgia’s highest honor. Greg has been an active member of BOMA Georgia for years, serving as a member of several committees and as a member of the Board of Directors twice.

As one BOMA member said of Greg, “I have realized in getting to know him that he really wants to help everyone be the best that they can be. He spends a lot of time mentoring many of BOMA’s newcomers.” Another member noted how Greg has given endlessly of his time and talents to benefit BOMA Georgia. This member said, “In 2013, I approached him about using space within his building to host a BOMA function, and without hesitation, he agreed.”

One of his peers summed up their nomination of Greg for the Huey Award with one of his favorite quotes from Thomas Jefferson. “The harder you work, the luckier you get.”