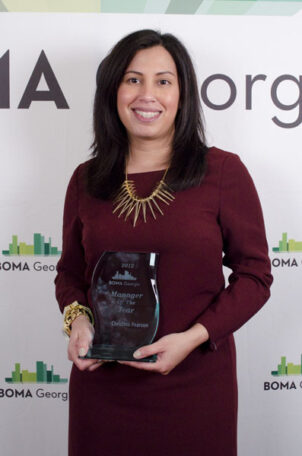 Based on the intense criteria for candidates eligible to win this award, it was discovered that Parmenter Realty Partners’ Christina Pearson far exceeded the requirements. One member began their nomination of her citing BOMA Georgia’s strategic purpose—that is, “to enhance the value and success of individuals and companies in commercial real estate.” As one allied member noted, “As a five-year veteran in the BOMA family, she has not only participated in many of the program and initiatives valuable to our association, but she has also made a positive impact on them.” It was also said of Pearson that her ability to develop a team and promote a family-style work environment is what separates her as an exceptional real estate professional. Pearson’s supervisor described her as a “professional, accountable person who consistently holds herself to a high standard in all that she does.”
She is further described to be diligent in both contract negotiation and implementation, no matter the size of the contracts. Pearson is also a recognized leader in BOMA 360 participation and is a past winner of an International TOBY award.